After record heat, a big cool down coming

After new records were set on Wednesday, temperatures will be more than 30 degrees cooler today.

New high temperature records were set in Greenwich, 90 degrees; New Haven and Danbury, 89; and Bridgeport with 87.

Along with cooler temperatures, rain moves in this afternoon and lingers until Friday morning.

The National Weather Service says the best chance of rain is from noon to 2 a.m. Friday.

[6 AM] Mostly dry for the first half of the day, but showers approach western MA/CT by afternoon, spreading east through the evening and overnight. Rain should be moving out by sunrise Friday. pic.twitter.com/PRivne1iDx

Strong winds Friday should bring down some leaves and acorns (a bumper crop this year).

Strongest winds are expected between 8 a.m. to 5 p.m. Friday.

Friday night will see some of the coldest temperatures in months.

Temperatures are forecast to be in the low 40s along the coast, mid-30s in interior Connecticut. Temperatures will be near freezing with patchy frost in the Northwest Hills.

On Thursday afternoon, the NWS said minor flooding is expected along the Fairfield and New Haven counties’ shoreline from 3 to 5 p.m. 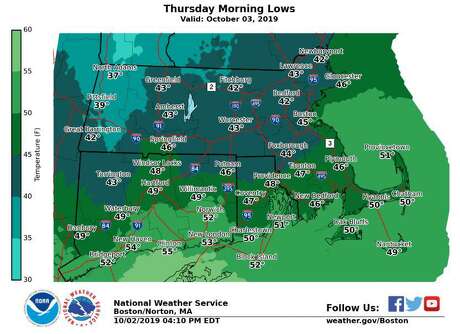 Today: Periods of rain, mainly after 10 a.m. High near 55. East wind 6 to 9 mph. Chance of precipitation is 80 percent. New precipitation amounts between a tenth and quarter of an inch possible.

Tonight: Periods of rain, mainly before 4 a.m. Widespread fog. Low around 50. East wind around 5 mph becoming light and variable in the evening. Chance of precipitation is 90 percent. New precipitation amounts between a tenth and quarter of an inch possible. 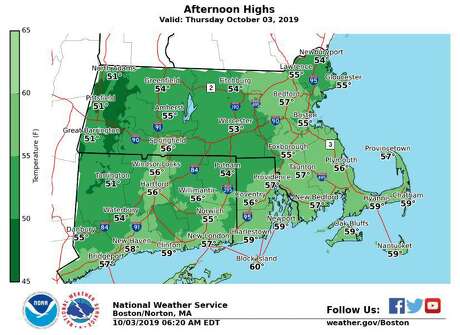 Friday: A 30 percent chance of rain, mainly before 7 a.m. Mostly cloudy, then gradually becoming sunny, with a high near 61. Northwest wind 9 to 17 mph, with gusts as high as 32 mph.

Friday Night: Clear, with a low around 34. North wind 5 to 10 mph becoming light northeast after midnight.

Saturday: Sunny, with a high near 60. Light and variable wind becoming southeast around 6 mph in the afternoon. 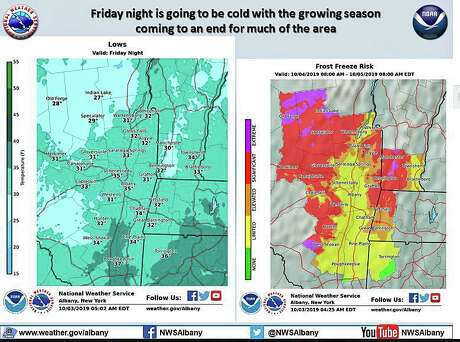 Saturday Night: Mostly clear, with a low around 44.

Sunday Night: A 50 percent chance of showers. Mostly cloudy, with a low around 56.