With rain and wet leaves falling, Metro-North is reporting train delays because of “slip-side conditions” on Thursday night.

In a 7:11 p.m. advisory, Metro-North reported delays of up to 10 minutes on the main New Haven Line.

The Waterbury Branch Line had up to 15 minutes due to congestion and slip-slide conditions. 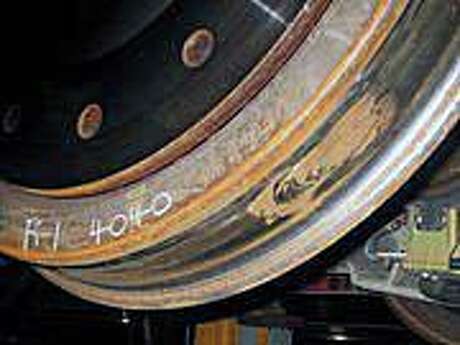 Metro-North Railroad provided a photo of a train's tire that has...

Slip-slide conditions are caused by a slimy substance left by crushed leaves on the rails that gets even more slippery after it rains.

From Wednesday night to Thursday morning, southwest Connecticut had the highest rainfall totals that brought down lots of leaves.

With 1.5 inches, Bridgeport has the highest total, according to the Community Collaborative Rain, Hail and Snow Network.

“When a train attempts to speed up or slow down, this gelatinous slime can cause the wheels to slip or slide along the rails.” Metro-North said.

“In severe cases, the train will automatically make an emergency stop, because the on-board computer system perceives ‘slip-sliding’ as the train not slowing down when it should,” Metro-North said.

“And this slip-sliding during braking also creates flat spots on the train's wheels, forcing us to take much-needed equipment out of service for repairs.”

During extreme slip-slide conditions, train speeds are reduced for safety and to prevent wheel damage.

Delays also are possible on Friday because rain is likely, mainly before 3 p.m. A northeast wind around 8 mph will also bring down more leaves, according to the National Weather Service,